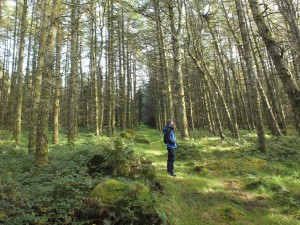 The landscape of our surroundings here at the studio are truly inspirational. I’ve been out exploring the Glens and mountaintops, the forests and waterfalls and found some seldom visited treasures. Most valleys contain a scattering of ring forts, burial chambers and animal enclosures some dating back to 500BC.
The images are from an area called ‘The Burren’ in county Cavan which is a high mountain site covered in dense forest and lots of tombs and  stone enclosures. These huge stones are very often covered with lush green moss and lichen giving a special atmosphere in the dense forest. Of course they have seen many changes since they were built and the surrounding forestry has probably come and gone numerous times over a few thousand years. Indeed the slabs show the signs of weathering by the wind and rain often creating beautiful patterns.
Add a trip to your summer vacation and come see for yourself

About three kilometres south of Blacklion and north-west of Cuilcagh Mountain lies a remarkable limestone plateau at an altitude of between seven hundred and nine hundred feet, which is now beginning to be recognized as one of the finest relict landscapes of its size in all of Ireland.

Burren is in every respect a “relict” landscape. Its funereal monuments, habitation sites and fields survive from prehistoric times. Its glacial erratics survive from the last ice age while its dry valley and associated doline bear testimony to a pre-glacial river and sink. The fossils embedded in its limestone are the coral of a tropical sea of 350 million years ago. The area is a unique educational resource, showing not only the history of human settlement from the tombs of the early Neolithic settlers to the limekilns and animal shelters of the nineteenth century farmers but in addition to this the evolution of a landscape from its formation in a tropical sea south of the Equator, through the various ice ages to the present. It is a palimpsest of history with layer upon layer of both human and natural history visible on its karstic features. 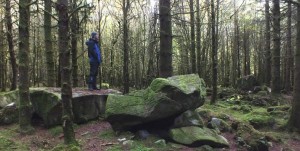 Twentieth Century
Its geographical location, plus the political situation in Northern Ireland probably contributed to a general lack of knowledge and appreciation of the Burren archaeological sites during the final third of the twentieth century. During this time also the maturing coniferous forest made access to the monuments extremely difficult, hiding from the general public this wonderful repository of human and natural history.
taken from “The Relict Landscape of the Burren Area of North-West Cavan” By Séamus Ó hUltacháin

The Cavan Burren is now part of the Marble Arch Caves Global Geopark, one of numerous UNESCO Global Geoparks found across the world. Some of the forestry has been cleared and pathways and signposts have been provided to many of the archaeological and historical sites.

Recent Discoveries in The Cavan Burren / Marlbank area
Prototype Tombs / Modified Glacial Erratics
“Prototype tombs are in fact modified glacial erratics which have been used for funereal purposes. They have not been found anywhere else in Ireland. We have for long suspected that they were tombs but did not get confirmation until last summer. They are very special – the missing link between the natural monuments (glacial erratic pedestal rocks) and the built megalithic monuments!!!.

Numerous other modified glacial erratics in the Cavan Burren and surrounding area (some incorporated into relict field walls) are also suggestive of sacred space and may have served as loci for ritual deposition in prehistoric times.”